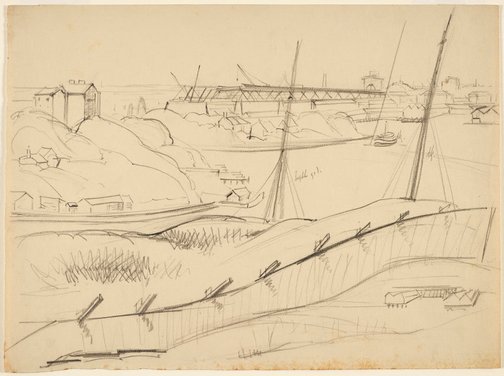 Adelaide Perry was an important figure in inter-war Sydney modernist circles and she had a remarkable facility for drawing. Her perceptive and angular rendering of form was acutely expressed in drawings from life, including portraiture, still life, landscape and the nude. As a teacher of art to aspiring professionals as well as children, she utilised life drawing and printmaking in instructing others, as well as in her own practice.

Born in Victoria in 1891, Perry settled in Sydney in 1925 after studies at the NGV School, Royal Academy, London, and in Paris. Perry exhibited widely in Australia in the 1920s and 30s, from the relatively progressive Contemporary Group and Grosvenor Galleries to the more conservative Society of Artists and Australian Academy of Art.

In 1926, she established her own school, and exhibited with the first Contemporary Group show with Thea Proctor and George Lambert. She was also a highly regarded and influential teacher at the Julian Ashton School. She later taught art at a Sydney girls’ school, PLC Croydon, from WWII until her retirement, all the while maintaining a painting practice.

This dynamic and fluent drawing is a study for a painting of Sydney Harbour. Perry made numerous drawings, paintings and prints depicting Sydney Harbour and the construction of the Harbour Bridge in the 1920s and 30s including her finest print The Bridge, October 1929.