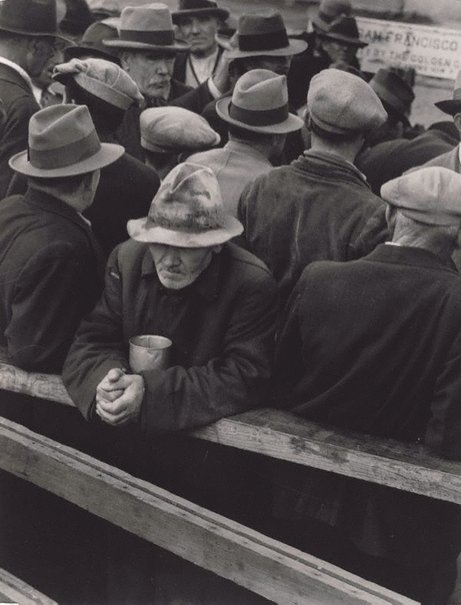 'There are moments such as these when time stands still and all you do is hold your breath and hope it will wait for you. And you just hope you will have enough time to get it organised in a fraction of a second on that tiny piece of sensitive film. Sometimes you have an inner sense that you have encompassed the thing generally. You know then that you are not taking anything away from anyone: their privacy, their dignity, their wholeness.' Dorothea Lange 1963 1

Dorothea Lange is widely recognised as one of the major figures in 20th century American photography. After working in various photography studios including that of Arnold Genthe, she settled in San Francisco in 1918 where she met Imogen Cunningham among others. Lange photographed continuously throughout the 1920s, however it was not until the 1930s that her style of socially committed photography began to develop when she moved beyond her studio portraiture business and focused her lens on the changing mood and character of the people she observed on the streets in her neighbourhood. Lange went on to work alongside Walker Evans and Ben Shahn documenting the misery of the American Depression, and from 1935 became a key figure photographing for the American government Farm Security Administration (FSA) program. Her most famous image, ‘Migrant mother’ 1936, forms part of the extensive work she did for the FSA project.

‘White angel breadline, San Francisco’ is Lange's first major image that encapsulates both her sense of compassion and ability to structure a photograph according to modernist principles. The diagonals of the fence posts and the massing of hats do not reduce this work to the purely formal – the figure in the front middle of the image acts as a lightening rod for our emotional engagement.