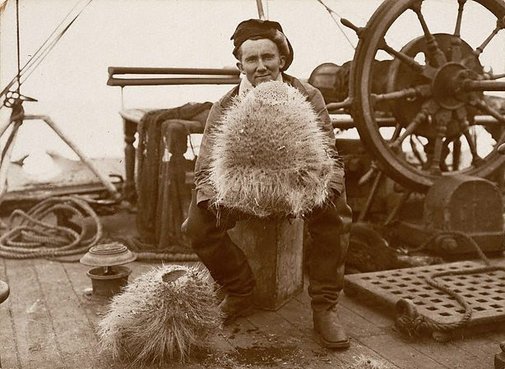 Herbert Ponting spent the first decade of the 20th century working as a freelance photojournalist and traveling widely through China, India, Japan, Korea, Burma and Europe. Ponting was the first professional photographer to be sent to Antarctica in 1909, taking both still and motion records. He recounted his experiences in ‘The great white south’ 1921, as well as the documentary ‘Ninety degrees south’ 1933.

Printed to a monumental ratio, the outdoor portrait ‘D Lillie with a large glass sponge’ exemplifies the manner in which Ponting narrated the British Antarctic ‘Terra Nova’ Expedition from 1909 to 1912. His documentation of the actual appearance of the explorers, their way of life, along with aspects of the polar environment, was of an epic scale. Through his use of the popular carbon photographic technique which was noted for its absence of grain, dense shadows and rich tonal range, Ponting recorded a biologist and two skeletal specimens of a deep sea animal, commonly named ‘glass sponge’, in exceedingly fine detail. Additionally, he carefully composed the image so as to contextualise the scientist and his study in terms of an identifiable aspect of the expedition, the ‘Terra Nova’s’ helm and deck. For Ponting the vessel was both stage and backdrop on which he evoked a sense of marvel at man’s achievements.

Captain Scott wrote in his journal in April 1911:
Of the many admirable points in this work perhaps the most notable are Ponting’s eye for a picture and the mastery he has acquired of ice subjects; the composition … is extraordinarily good, he seems to know by instinct the exact value of foreground and middle distance and of the introduction of ‘life’, whilst with more technical skill in the manipulation of screens and exposures he emphasises the subtle shadows of the snow and reproduces its wonderfully transparent texture. He is an artist in love with his work.1

Browse other works by Herbert Ponting