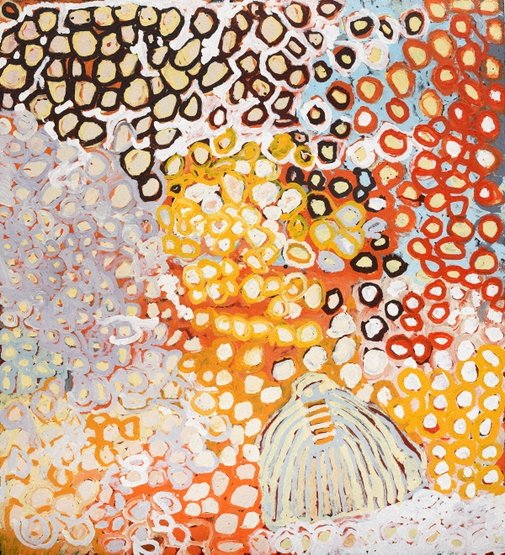 Harry Tjutjana is an extremely talented artist whose spontaneous, energetic paintings capture the innovative potential of desert art. Although one of his works is recorded in the Stuart Art Centre Archive from the early 1970s, Tjutjana only began painting consistently in 2005. Since this time he has become one of the most recognised artists of the southern desert region. The powerful art movement currently emerging from this region is an area of focus for the collection.

'Wanka (Spider)' 2011 is a major work by Tjutjana depicting the powerful spider man, a Ngankari or traditional healer and may be seen as a representation of Tjutjana himself. As Tjutjana states, 'I am the spider man, Ngankari.'This strong assertion of identity evidences Tjutjana's seniority and has led to a significant development in his practice, conceptually and stylistically. The bold colours in layers and overlays in 'Wanka (Spider') 2011 show an enjoyment of the act of painting itself and reveal the innate expertise of Tjutjana as an artist. The art centre documentation for this work states: This is a big spider man. Watipaluru Ngankari (A male healer, traditional doctor). He is a powerful man. When rain comes he hides in his nest. He is a clever man. At night time he changes colour. His name is Wanka, spider. That's the story. Minyma wanka tjuta, these are all the women and the children for this man (around him). I am the spider man, Ngankari.

Browse other works by Harry Tjutjuna