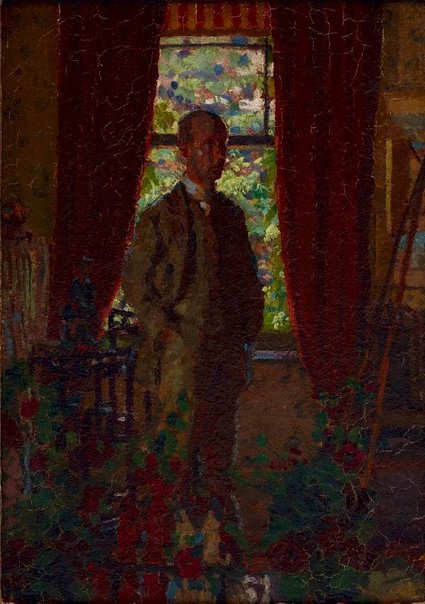 As a founding member of both the Fitzroy Street Group in 1907 and the ensuing Camden Town Group in 1911, Harold Gilman greatly contributed to the development of art in modern Britain. Although the works of engraver and painter Walter Sickert inspired the emergence of the two groups, it is Harold Gilman and his colleague Spencer Gore who are recognised with creating a new style within the country. Named after a squalid area of London, the Camden Town Group depicted the evolving people, activities and attitudes of the metropolis and focused on Britain’s transition from an industrialising nation into a modern state. Despite having introduced post-impressionism to Britain and often being labelled post-impressionist themselves, the Camden Town Group’s style is a culmination of the exciting developments it saw in modern European art. As exemplified in Gilman’s ‘Self-portrait’, the group drew from the impressionists’ treatment of light, Georges Seurat’s divisionism of colour, and from Fauvism’s painterly emphasis, in addition to emphasising the importance of post-impressionists, like Van Gogh. Standing half-turned, with his hands in pockets, against a halo of light pouring into an object-filled room, Gilman depicts himself as both an individual and as a man of culture and the world. (EF)