Fragment of a lintel depicting the Navagraha (nine planets) 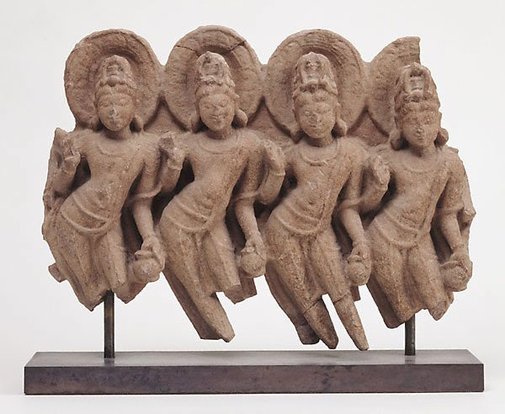 This carved sandstone relief of four standing figures is part of a sequence of figures depicting the personified representations of the Nine Planets or "Navagraha". According to James Stutley (1977), the Nine Planets are traditionally designated as the Sun, Moon, Mercury, Venus, Mars, Jupiter, Saturn, Rahu (the ascending node of the moon) and Ketu (the descending node of the moon). These planets are of great significance in Hindu belief and are worshipped or propitiated as protective deities. The Navagraha may be identified by the pots which they carry in their left hand and the characteristic gesture of "abhaya mudra" (gesture of fearlessness) indicated by the right hand. The aureole behind each figure indicates their divine or celestial origin. The repetitive and linear sequence of the figures in this relief suggests that this fragment would have once decorated the lintel or over door (uttaranga) of a temple. The Navagraha are usually associated with temples dedicated to the Hindu god Shiva.

Fragment of a lintel depicting the Navagraha (nine planets)

Margaret & James Stutley, A Dictionary of Hinduism: Its Mythology, Folklore and Development 1500B.C. - A.D. 1500, London, 1977. Note that this work of art is not illustrated or referred to in this publication. This is a general text only.

Gods, Guardians and Lovers: Temple Sculptures in Northern India, A.D. 700-1200, New Jersey, 1993. Note that this work of art is not illustrated or referred to in this publication. This is a general text only.