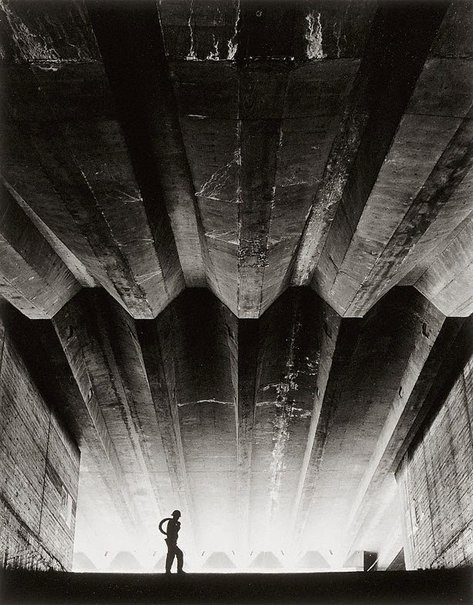 In the late 1940s Dupain increasingly specialised in architectural photography and photo-documentary. He chose to work outdoors rather than in the studio in order to capitalise on the bright Australian light, wishing to show ‘a thing clearly and simply’.1 Dupain developed a longstanding working relationship with modernist architect Harry Seidler after Seidler’s arrival in Sydney in 1948, and in the 1960s and 1970s he documented the building of the Sydney Opera House.

‘Concrete support beams (Sydney Opera House)’ is a severely formal image emphasising the power of material and the soaring structure of the building. The lines of the concrete darken towards the viewer and the light is caught head-on streaming in at a distance. The only disturbances are the variable marks on the concrete and the small form of a worker in the distance silhouetted against the light. The workman further emphasises the monumentality of the structure and is an important counterpoint – the opera house was made by workers such as this man. The low vantage point in ‘Concrete support beams (Sydney Opera House)’ harks back to ‘Pyrmont silos’ 1933 and ‘Sunbaker’ 1937, but the use of light is more complex and a sense of the essence of form is more forcefully presented.

By the 1960s Dupain’s photography had completely eschewed the experimentation of the early years and moved on from his more socially engaged postwar years. Dupain, like David Moore, was able to access more information on American modernists in the late 1940s and into the 1950s, particularly people such as Edward Weston whose interest in distilling visual and emotional experience struck a chord in different ways with both photographers.2