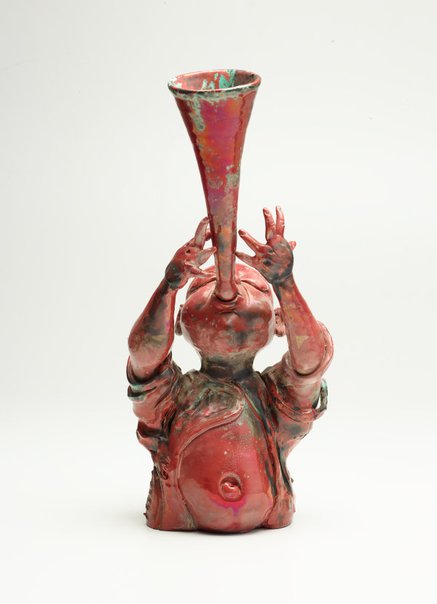 John Perceval is one of Australia’s best-known artists, a member of the Angry Penguins group of modernist artists, who brashly attempted to shake up the entrenched cultural establishment of Australian art in the 1940s and whose members included Joy Hester, Sidney Nolan, Arthur Boyd and Albert Tucker. Perceval’s painting is known for its direct gestural qualities, with a use of impasto and expressive brushwork the defining characteristics, and a focus on landscapes, portraits and still lifes, vocally eschewing abstraction as a member of the Antipodeans group in the 1950s.

The significant ceramics component to Perceval’s output is his series of ceramic angels, made between 1957 and 1962 and not only among his most well-known works but considered to be among the most important series of works of Australian modernism, alongside Nolan’s ‘Kelly’ series and Tucker’s ‘Images of modern evil’. In distinctive red and green glaze, these angels are Perceval’s way of exploring the terrestrial and the heavenly. The angels are highly expressive, sometimes cheeky and playful, sometimes menacing, and can be viewed as Perceval’s outlet for interrogating the psyche. It has also been noted that the bellybuttons of the angels, including 'Angel with trumpet' are unusually large and eye catching, drawing attention to the motherly bond, or perhaps indicating a third eye, or ‘mind’s eye’ providing perception beyond ordinary sight. Angel with trumpet is one of a number of works in the series to focus on the playing of a musical instrument, suggestive of creativity and mastery.

Michael Chase (Organiser), Two aspects of the work of John Perceval, London, 1964. cat.no. 8 as 'The trumpeter'

Browse other works by John Perceval

John PercevalThe giant and the dwarf204.2018 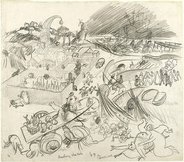