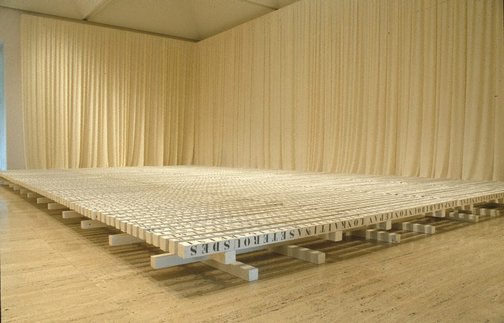 The idea of a raft is of something lashed together, an inventive solution to a problem, of making do from available materials, of creating something which may be lifesaving. A raft also suggests travelling, and specifically travelling over water. This particular raft however is associated with the desert through the text laboriously stenciled onto its surface. It is a raft therefore which could never have the opportunity to float.

The text begins in one corner of the structure and unfolds continuously in 24,948 characters which comprise several thousand words in six different languages. It can not be read in an unbroken sequence however as whole lines are obscured by the structure of the raft itself, by the object created to float these ideas expressed in words.

The text itself “… inscribed on the three surfaces of the timbers commemorates the life of the Lutheran missionary, Carl Strehlow – a scholar versed in New Testament Greek, in Vulgate Latin, not to mention the dialects of the Lutheran and King James Bibles, and who undertook to translate the same into both Dieri and Aranda. The passages from Acts 27 and 28 narrate St Paul’s voyage from Caesaerea to Rome, his wreckage in Malta where a ‘barbarous people shewed us no little kindness.’ Repeated six times in the six languages of Carl’s life, they also allude to Strehlow’s last journey when, in urgent need of medical help, he set out from Hermannsburg Mission on an improvised ‘van’ or ‘raft’ to travel overland to the Adelaide-Alice Springs railroad – a distance of some 400 miles. He never made it, dying shipwrecked at an isolated cattle station further down the Finke River…” (Paul Carter, ‘On rifts’, ‘Raft’, University of Melbourne, 1996).

Strehlow was both missionary and anthropologist, paternalist and yet deeply interested in the culture of the Aranda and Loritja people of Central Australia. His seven volume study of the spiritual beliefs, material culture and customs of the Aranda and Loritja was published in Germany between 1907 and 1920. The complex interweaving of experience and belief in Strehlow’s own life, the legacy of colonisation, the teaching of Christian values to the local Aboriginal population and yet the desire to understand their culture are suggested in the interwoven text in ‘Raft’ which forms a lattice of words and references. A raft can not float in an art gallery any more than it can in a desert, but this particular raft is a poetic response to a particular place and time and the histories and experiences that came together there. The ambiguous nature of that interaction has expression in this ambiguous structure which can not be what it sets out to be and yet floats ideas and meanings into the viewer’s space.

Browse other works by Ruark Lewis