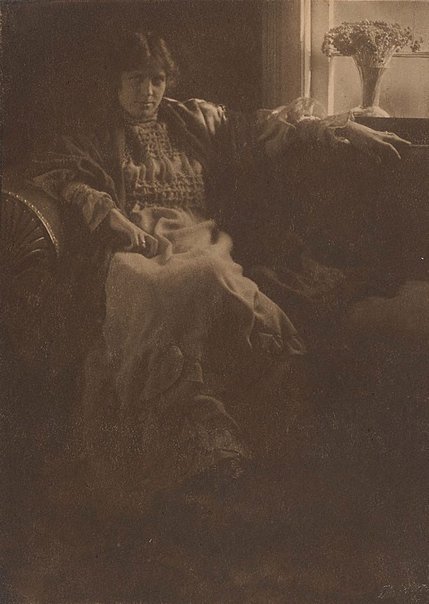 This intense portrait is typical of the mature work of portrait photographer Rudolph Dührkoop. Based in Hamburg, Germany, Dührkoop had run a modest studio since the 1880s. He was greatly influenced by the enormous international photographic exhibition held in 1893 at the Hamburg Kunsthalle. Consisting of 6000 photographs by 458 ‘amateur’ photographers from around the world, the exhibition caused a revolution in German photography. Included in the show were David Octavius Hill and Robert Adamson’s portraits which had never been seen in Germany before, as well as the work of American photographers such as Alfred Stieglitz. The director of the Kunsthalle, Alfred Lichtwark, dedicated himself to the promotion of photography as art and Dührkoop, despite being a commercial photographer, heeded the call. In the late 19th century, having studied photographic trends assiduously and attended Lichtwark’s lectures, Dührkoop became known for his insightful pictorialist images taken in the sitters’ homes rather than in the studio.

This portrait is no exception as the woman from Hamburg sits in shadow with the soft light from a window defining her hands, face and smocked dress. Her lowered face, straight gaze and half-smile give the impression of strength and confidence: this is not an allegorical portrait of a shy maiden like much British photography of the period. Although the name and status of the woman is unknown, she was clearly a forceful personality in Hamburg society.

Dührkoop became an important figure in Hamburg photography and in the early 20th century was sent by the city to Paris, London and America. He held a solo show at the Royal Photographic Society in London in 1909. That year he was described by E O Hoppé as ‘the pioneer of artistic portrait photography on the Continent’.1

Browse other works by Rudolph Dührkoop