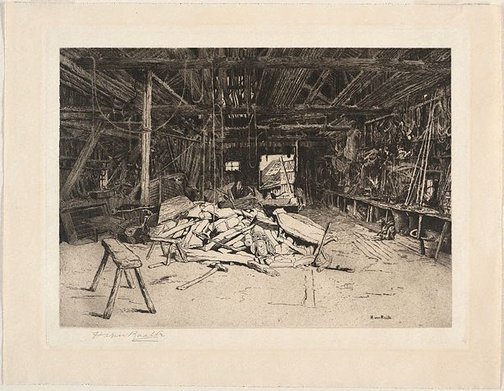 Henri van Raalte was an established etcher in England before emigrating to Australia in 1910, having been an Associate of the Royal Society of Painter-Etchers from 1901, and had an etching reproduced in a special edition of the Studio on 'Modern etching and engraving' in 1902.

Van Raalte produced a series of expressive drypoints, including landscapes featuring gum trees, while living in Perth, and later Adelaide, establishing a national reputation within a short time of his arrival. Critics, such as Norman Lindsay who wrote favourably about his work in 1918, responded most to the sense of grandeur and drama with which van Raalte could suffuse a simple subject like a tree. This romantic treatment of the landscape aligned with ideals of heroic nationalism which many artists of the period felt must be the highest aspiration of Australian art. Van Raalte eventually produced a large oeuvre of etchings, drypoints and aquatints of cityscapes, landscapes and genre scenes by the time of his death in 1929.

Trustees of the National Art Gallery of New South Wales, One hundred years of Australian art, Sydney, circa 1945. cat.no. 34; titled 'The boat builder's shed at Rye'