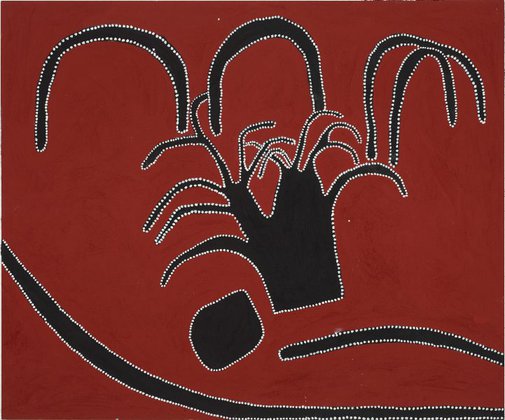 Timmy Timms and his sister Peggy Patrick both painted this boab tree near Mistake Creek where many of their mother's family were murdered. There is a fence around the tree and a memorial plaque. There must have been more than one massacre in the Mistake Creek area. Timm's account is very similar to the story found in police records from 1915 but also contains elements of the story told by his sister. The name Olwen Joe in this story is historically known as 'Joe Winn':

"There was a place up from Mistake Creek that white people called Beattie's Hole. There used to be a permanent deep water hole there but it dried up after all the Aboriginal people were killed there. There is still an old mud brick building there. White people stayed there. The white man [Bob Beattie] had one Aboriginal man living with him and some other Aboriginal workers. They stayed there too.

On holiday, some [Aboriginal] people went up into a gorge at a place they called 'Merntaban' [place with paperbark trees]. The were camping there. What went wrong is that their dogs bit a cow and knocked it down. The people looked and said, 'Oh, the dogs have knocked it down'. Then they killed it and cut it up to eat. They cut it up and carried it to their camp down there in the gorge.

That Aboriginal man [Olwen Joe] heard the dogs barking. When the dogs were barking he said to the white man, 'Oh! The dogs are barking. I'll go and have a look up here'. 'Yes, you can ride over there', he replied. The Aboriginal man got on the horse and went up to the people in the gorge. He looked and saw meat hanging up everywhere in the trees. He said to them, 'I'm hungry. Give me some meat. I'll take it home to cook'. But he was lying to them. They gave him the meat and he took it down and showed it to the white man, 'See what that mob of blackfella have done', he said. 'They killed this cow'. 'Oh!' said Bob Beattie the white man.

They saddled up and went up there. They called up Mick Rhatigan from Turkey Creek. He joined them. They went up into the gorge. 'All the people are there now', he [Olwen Joe] said to those two [Bob Beattie and Mick Rhatigan]. They couldn't get out this way, they couldn't get out that way. The white men had them stuck in the gorge. They shot them there; they finished them up there.

One old woman, I don't know her name, was wounded in the leg when they shot her. She crawled along and pulled herself down the creek. Two of my uncles took off. He [one of the murderers] took aim and hit the uncle who was behind. They spoke to each other. 'Oh no, never mind, you are not alive, you can't get up', said the youngest one. The oldest one died, the other kept going and came down over the hill behind Turkey Creek near 'Mirrilingki'.

He kept going and told the policeman [at Turkey Creek]. 'Ah! All right, you boys get the horses', said the policeman, 'Get horses for us. There's some trouble'. They went looking for the police horses. The sun was just going down when they found them. They took them back and saddled them up. It was daybreak when they got to Mistake Creek. They came to the house and some people who were working here told them, 'Oh they have taken them down there in chains'.

One large group of people were killed first [in the gorge]. After that they took a lot of young men and women and middle-aged people, chained them up and waited for the night at the house at Beattie's Hole. Just coming up to dawn, at about three in the morning he said [Bob Beattie], 'All right we'll keep moving'.

The policeman had started from Turkey Creek at about the same time. He got to the house at Mistake Creek after they had gone. He asked one Aboriginal man left there, 'Where are they all?' 'Ah they took them down there in chains.' He went along after them. He followed them down. Just on daybreak he came up to the tank at Mistake Creek in time to hear the last shot. All the others were shot before he got there, young men and women.

One Aboriginal man [Olwen Joe] came out and saw the police horses tied up near the boab tree. 'Right all you policemen, I know you're here. Come in', he said to them. That man might have felt sorry about helping the murderers. 'Come on I'll show you.' They tied him up, put handcuffs on him.

Just before they got there, the last shot sounded. The Aboriginal man took the police in. The white man was bending over putting bodies on [the fire]. The police came up and poked him with a rifle. 'Oh you shot all the dogs did you? You made a good job of it? You killed all the dogs did you? said the policeman and hit him with a rifle. He hit him, pulled off his shirt and trousers, leaving him naked, chained up. Yes, the police chained up that murderer, the while man called Mick Rhatigan.

The Aboriginal man called Olwen Joe was an educated person who could read and write. He was a flash fellow. He was friends with the white man. He came from Darwin. He had his own rifle and everything. He helped the two white men with the murders. After that they piled up all the bodies on the fire in the same way [as at Bedford Downs]. The Aboriginal man helped them shoot. They all shot them. It was such a cruel thing. They did it like that; led them to the pile of firewood, shot them and threw them on. They kept going like that.

When the policeman arrived with the police boys [Aboriginal police], he belted him [Mick Rhatigan the white man] with a rifle and tied him up to the tree. The Aboriginal man [Olwen Joe] ran off to the west heading for the black hill on Bow River. The two police boys chased him from the east. They were grandfathers of mine called Bernngany and Wayanginy; I have forgotten their European names. The Aboriginal man was riding a chestnut mare. When it couldn't gallop any more he got off. He ran up the hill and tried to hide. My two grandfathers stayed at the bottom of the hill and shot him from there. They got him and dragged him back. They cut off his head and took it back to the policeman, leaving his body there. 'Very good you boys', said the policeman.

After that they [the bodies] were ashes and charcoal. The policeman looked at it and shook his head. He tied up the white men and dragged them in to Turkey Creek. There was one other Aboriginal man they chained up and took as well, but he was just a horse-tailer, not a murderer. He never killed anyone. He [the policeman] took Bob Beattie and Mick Rhatigan into Turkey Creek.

Well my uncles, lots of my father's brothers and mother's sisters are all there [in the killing place]. The place where they were burned is shown by the black mark in this picture. People came out form Turkey Creek to pray for them there and I go there with the men to perform ceremonies for them because they were law men. I have shown the road going into the grave and the highway to Turkey Creek. You can see the Bow River hill where they caught the man. The boab tree grows close to the grave site. That's the story. White people call it Mistake Creek. We call it 'Gurtbelayin' - the place where many were killed at one time".

[excerpt from: Tony Oliver, 'Blood on the spinifex', exhibition catalogue, The Ian Potter Museum of Art, The University of Melbourne, 2002]

Browse other works by Timmy Timms 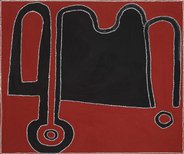