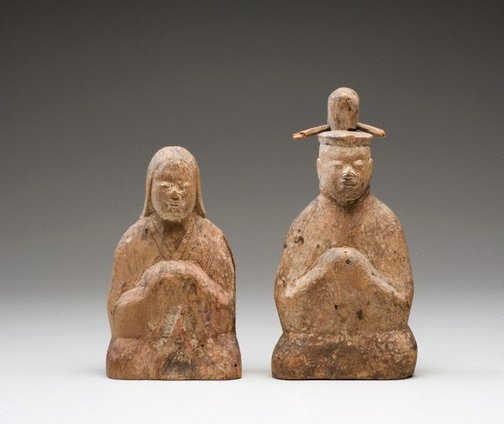 These small, yet dignified, deities are early examples of the representation of Shintō gods, or kami, in human form. They are rendered here as court nobles: the woman dons Chinese Tang-dynasty style robes and coiffure, while the man wears a tall cap and holds a sceptre, now lost, as a symbol of authority. Shintō sculptures were usually carved out of wood – often from old trees revered as the dwelling places of kami – in what is referred to as the 'single-woodblock technique' or ichiboku-zukuri. Appendages such as hands, feet and hand-held attributes were attached separately. Pigments were then applied to delineate garments, but seldom survive with the passage of time.

cypress wood with traces of pigment