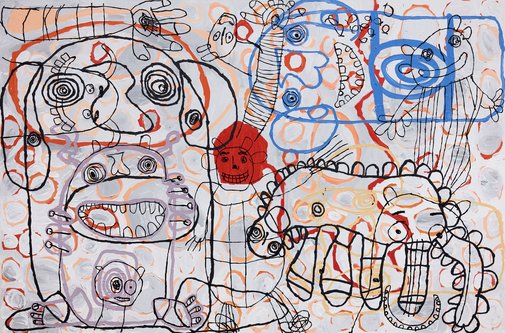 Tiger Yaltangki grew up in Indulkana and has painted through Iwantja Arts for many years. Whimsy and fantasy inform his practice as he combines elements from his Anangu culture with science fiction and his love of music. Yaltangki’s works offer a unique image of contemporary life and explore the divergent influences that have shaped his world view. Growing up and working in the small community of Indulkana in the Southern Desert region, his works are as likely to include mamu spirits from his Yankunytjatjara culture as they are images inspired by popular culture.
In ‘Star Wars’ 2016 Yaltangki populates the canvas with a cast of ambiguous figures layered with an array of linear shapes and graphic forms. Imbued with a sense of curiosity and humour, Yaltangki’s cast of characters exists in a dreamlike state where diverse influences mingle and coalesce, evoking Anangu culture and place as well as the wonders of time travel and parallel universes that dominate science fiction series.

Browse other works by Tiger Yaltangki