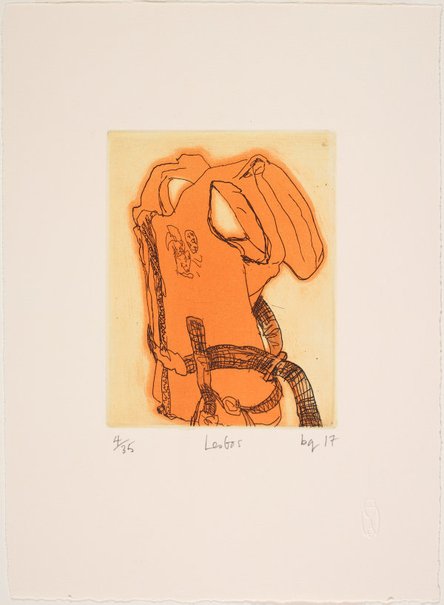 In early 2016 artist Ben Quilty and author Richard Flanagan travelled to Greece, Serbia and Lebanon where they witnessed the devastating impact of the refugee emergency that had engulfed the eastern Mediterranean since the Syrian crisis. As they walked along a beach on the Greek island of Lesbos, they encountered a long line of discarded life vests, which Quilty later described as a “high tide mark of bright orange”. These had been left by Syrian refugees as they disembarked from the boats that had carried them over the water to safety. They were the lucky ones - the vests remained as markers of their survival. Many had not been so fortunate.
Quilty and Flanagan travelled to the region at the invitation of World Vision with the aim of gaining a deeper understanding of the plight of refugees and asylum-seekers, an international phenomenon with compelling and urgent resonance in Australia. The trip resulted in a collaborative book, "Notes on an exodus", as well as two exhibitions by Quilty, at Tolarno Galleries in Melbourne and a group show at the Art Gallery of South Australia. It also led to this modest, but poignant, etching published by the Art Gallery of New South Wales Foundation.
Lesbos depicts a child’s life jacket, standing upright with its buoyant rear collar aloft like the wings of an angel. The simple linearity of the image is infused with a bright, saturated orange in aquatint, bringing the viewer straight to the Greek island beach of Ben Quilty’s memory.
To make the etching, Quilty visited Cicada Press at the campus of UNSW Art + Design, Sydney. Headed by artist and master printer Michael Kempson, Cicada produces prints with artists from around Australia, working closely with them to make and edition etchings and lithographs with the help of students and studio staff. Quilty drew on an etching plate with a life vest standing in front of him as model over a few hours, after which it was etched and editioned by Cicada.