Portrait of a man from Ethridge (sic) River, North Queensland 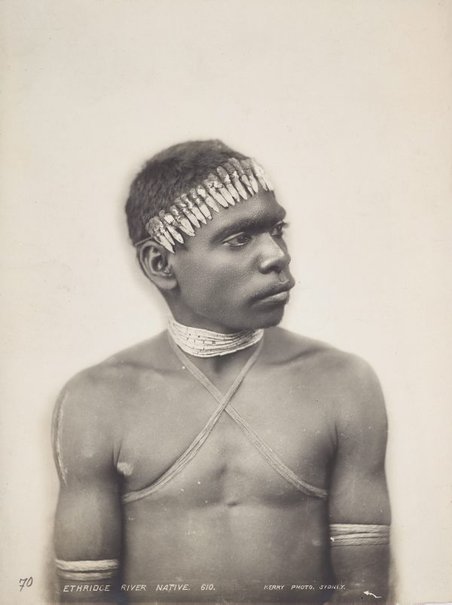 Charles Kerry was a professional photographer and owner of the successful photographic firm Kerry & Co. The company specialised in both rural and city views but also produced portraits of Aboriginal people and ceremonies for the 1886 Colonial and Indian Exhibition in London and continued taking studio portraits of Aboriginal people in the years following, before his retirement in 1913. Kerry marketed these photographs as ethnographic typological studies and the material was widely disseminated amongst universities, natural history museums and private collections. Many of the photographs published by Kerry & Co were also distributed as mass-produced postcards in the early 20th century.

Kerry is not known to have travelled to Northern Queensland, however other Aboriginal people from Queensland sat for him in his Sydney studio, including members of Meston’s Wild Australia show in 1892. It is possible that this man, presumably from the Etheridge river region in Northern Queensland (according to the photograph’s inscription) had also travelled to Sydney.

The vegetable-fibre string chest strapping and grass-stem necklace the man is wearing are more commonly associated with the Iwaidja people from the Cobourg Peninsula, Northern Territory while the kangaroo tooth headband appears in photographs of people from the Larrakia nation, also Northern Territory. However, it is possible that these items were used as props by the photographer. At the time, it was common for Aboriginal subjects to be dressed arbitrarily, wearing accoutrements that were incongruous with their own backgrounds, but also paid.

Purchased with funds provided by the Photography Collection Benefactors’ Program 2015

Browse other works by Charles Kerry