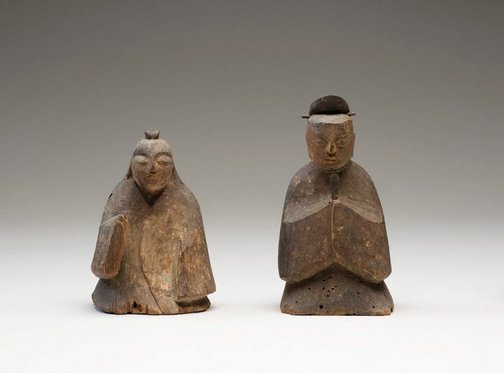 These small yet dignified deities are early examples of the anthropomorphizing of Shintô gods, 'kami'. The deities are rendered here as court nobles, with the men wearing tall caps and sceptres, symbol of secular authority, and the women in Tang-style robes and coiffure. Shintô sculptures are usually carved out of wood, often from old trees revered as the dwelling of the 'kami', in the so-called single-woodblock technique, 'ichiboku-zukuri', while appendages such as hands and feet and other hand-held attributes are added from separate pieces. Pigments were then applied to the surface to delineate the garments. This coating, however, seldom survives the passing of time.

In Japan, anthropomorphic representations of gods were unknown before the spread of Buddhism, although deities were symbolically associated with sacred objects, such as mirrors, swords, and jewels that became imperial insignia. Following the advent of Buddhism, Shintoists began to make images. The form of worship, however, did not change, as representations of gods were hidden away in the inner sanctuary of the Shintô shrine, adherents demonstrating their faith–at the entrance–simply by clapping their hands.