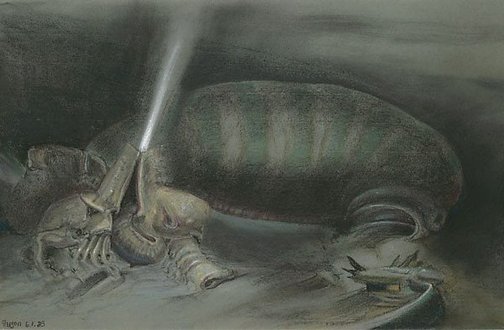 The green paper suggests marine life or the subterranean, which Gleeson forgoes in the subsequent painting.

'The blimp itself, the great central shape, is like a stranded whale, something from another order of creation suddenly dumped or fallen into this strange landscape ... there is electric discharge going on, a beam of light, some sort of mechanical activity ... the bulbous blimp shape itself seems dead. It has been killed by its contact with this garden. Perhaps it has been brought down by these electrical discharges, like the Zeppelins over London in the First World War. I remember being enthralled by illustrations in the 'Illustrated London News' of which my Aunt had a whole series from before the First World War, because I remember the drawings of the sinking of the Titanic in them. I remember too, these Zeppelins being brought down over London', Gleeson quoted in Renée Free's unpublished catalogue of James Gleeson's work.