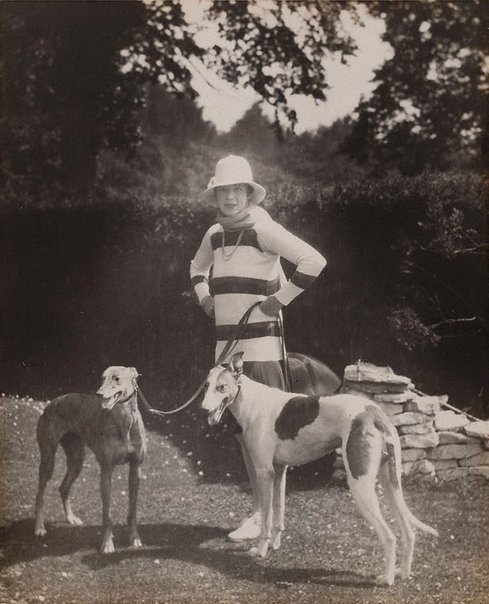 Inspired by a picture postcard of the Edwardian stage actress Miss Lily Elsie, Cecil Beaton took up photography as a child. His early works from the 1920s use his sisters and friends as models in luscious and artfully lit tableaux which show the influence of Baron Adolphe de Meyer, the first ‘Vogue’ fashion photographer. Beaton’s love of artifice and theatrical settings characterised much of his fashion and portrait photography, and served him well in his later career as a Hollywood stage and costume designer.

In its outdoor location, casual pose and spare composition, the portrait of Lady Hudson presents an economy of style and expression unusual for Beaton at this time. In 1928 he established his first studio in London, specialising in portraits of debutantes, society ladies and minor aristocrats ‘posing with their heads under a Victorian glass dome, peering through tinsel screens or lying head-to-head on the floor’.1 The best of these were published in his 1930 ‘Book of beauty’, which ensured his reputation as a society photographer. In the same year he travelled to New York, where he commenced his career as a fashion and celebrity photographer, working from the 1930s to the 1950s for ‘Vogue’ and ‘Harper’s Bazaar’. In 1939 he was appointed court photographer to the British Royal Family, a position he held for more than 30 years. His portrait of Lady Hudson, like his best portraits of royalty, eschews artifice in favour of a more restrained approach, conveying the well-bred poise of his sitter. In 1936 Beaton wrote: ‘I was about to photograph a number of sports suits when suddenly I felt I could no longer portray them languishing in the usual attitudes of so-called elegance. I made them put on dark glasses and stand in angular poses … for me at any rate, the days of simpering were over.’2