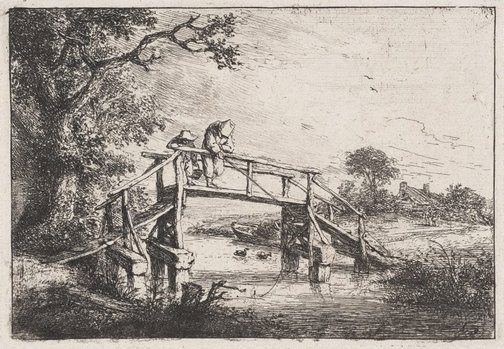 Van Ostade is thought to have been a pupil of the great Dutch painter Frans Hals, but his paintings show no signs of the latter’s influence. With his brother Isaac, van Ostade became the main exponent of paintings of low-life genre and peasants, spending his prolific career in Haarlem, where subjects of this type were a particular specialty. He was also a talented printmaker, regarded by his contemporaries and later generations as second only to Rembrandt for his 50 etchings, which remained enduringly popular long after his death and went through a number of editions.

The 50 prints – of which only ten bear dates between 1647 and 1679 – invariably depict rustic villagers inside their cottages, in taverns, or in the outdoors engaged in various everyday activities.

A mood of blissful tranquillity is expressed in The anglers, van Ostade’s only true landscape print. On a ramshackle wooden bridge a hunched peasant, accompanied by a young friend holding a basket, trails his fishing line in a shallow stream. With its unassuming rusticity and understated presentation of the countryside at large, the print is a characteristic example of the Dutch approach to landscape art in the 17th century.

Renée Free, Forest and field: from Claude to the Barbizon School, Sydney, 1995, 6.