Magic horn stopper of figure riding on a horse 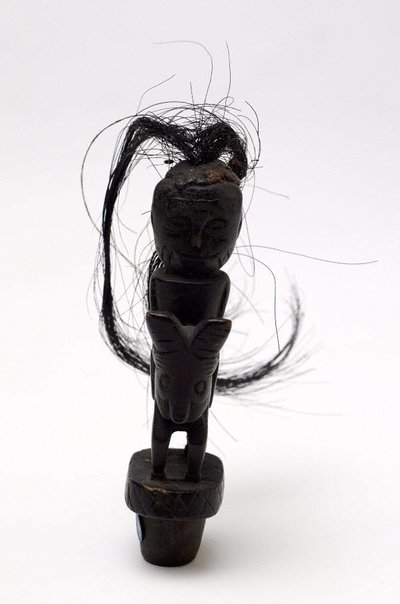 The equestrian figure is a popular motif in Batak art and ritual that is associated with ancestral worship and a safe passage to the afterlife. Large equestrian statues would mark the graves of prominent chiefs, smaller carved figures were used to adorn spirit houses, sword sheaths, granary doors and in this case act as stoppers. Such carved stoppers were made to protect the contents of containers made from an eclectic array of materials, including wood, ivory, gourd and ceramics. Imported ceramics were probably acquired by the Batak on the east coast of Sumatra and traded for a number of locally sourced commodities including ivory, wax, cotton or tobacco. The containers known amongst the Batak as ‘guriguri’ were used to store talismanic mixtures known as ‘pukpuk’ . The ‘Datu’, or spiritual leader of the community would apply the mixtures ritualistically to objects and people to imbue them with protective properties and pacify the ancestors.

figure with hair, pony tail, patina heavily encrusted with smoke as is the horse, on which it rides

Magic horn stopper of figure riding on a horse