Night, from The four times of the day 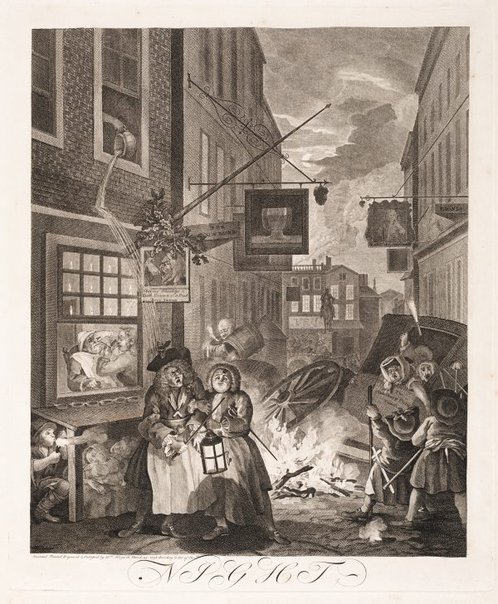 'Night' presents a scene near Charing Cross with Le Sueur’s statue of Charles I in the background. The oak branches announce that it is 29 May, the day on which the restoration of Charles II was celebrated. Ironically, the scene is devoid of celebration. In the foreground a drunken freemason, wearing a collar with a square, staggers home supported by a servant. The freemason is traditionally identified as Sir Thomas de Veil, a Westminster magistrate famous for his prosecution of unlicensed gin sellers. Drenched by the contents of a chamber pot, he is oblivious to the chaos around him. A coach has crashed while trying to avoid a bonfire in the middle of the street. In the barber shop the barber-surgeon shaves and squeezes the nose of his customer. The row of dishes on the barber’s sill show the blood drawn from the day’s patients. Beneath the window, a group of homeless people huddle together in sleep.