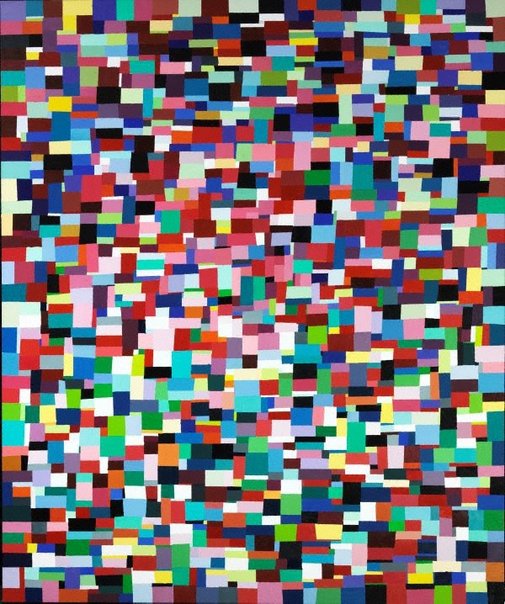 Both compositionally and philosophically, Melinda Harper’s ‘Untitled’ is built on the ruptured grid of cubism. Her complex arrangement of multi-hued tesserae appears casual and organic but sits nonetheless on a regular lattice of horizontals and verticals. Within this organising structure, Harper paints with no overall plan but instead allows her final composition to emerge from the process of applying paint, an activity in that sense not unlike that of the abstract expressionist artists of the New York school. The work is completed when she determines there is an overall balance of activity that will shift the viewer’s focus restlessly across the painted surface.

The small, flat sheets of colour in ‘Untitled’ are not aligned directly within the grid and jostle for position on the canvas. The variation in the patches produces an oscillation of the surface that is akin to the retinal vibration of op art of the 1960s. The fractured surface produces an illusion of shallow depth across the picture plane, stemming from the advance and recession of colours, and the relative size, soft edges and overlap of the patches. Harper has no abiding interest in creating the set patterns of op art but she is concerned with the visual rhythms that ripple throughout the painting. Colour and geometry are given equal status: there is no dominance.

Harper’s painting is not shaped by the critical ideologies that might have driven the abstraction of earlier generations. There is, for example, a resemblance to the work of Paul Klee but in ‘Untitled’ Harper appears to lack the conviction that transcendent communication is possible. There is little in the way of explicit content, beyond a nod in the direction of her primary sources in art history. This acknowledgment forms the basis for the ‘retro’ look of her work and ‘Untitled’ operates as an idea of abstraction as much as the real thing. From the perspective that ‘Untitled’ acts as a ‘sign’ of modern art, Harper uses a mix of blatant decorative appeal and a concern with style to perversely comment on abstraction’s inability to articulate a response to the exigencies of life. Her work supports a hip aesthetic, immune to irony, which has the look of apartment decoration or the visual equivalent of the urbane lounge music fashionable in the late 90s. Harper’s witty and arch evocation of chic decor acts as a form of pop art, where the subject matter is art and taste. Her uninflected chips of colour are as fashion conscious and as varied as a hardware store paint chart; these are not colours drawn from high art but somehow samples. Harper’s concern with surfaces and image in ‘Untitled’ makes a compelling argument for visual pleasure.

Ben Curnow, Primavera: The Belinda Jackson exhibition of young artists 1998, Sydney, 1998. No pagination. Note that there is an illustration of one of Harper's works in this catalogue, this work has the same title, date and dimensions, but this is not the Gallery's painting.