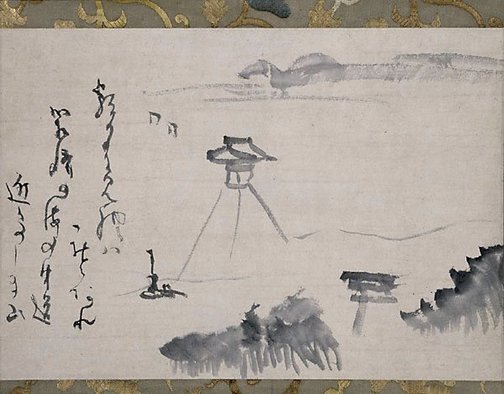 Sengai is one of the best-known artists in the latter-day history of Rinzai Zen. He stayed at Shofuku-ji, Japan’s oldest Zen establishment in Hakata, near Hakozaki Hachiman Shinto shrine, for almost 40 years. The shrine’s symbolical gate (torii) is depicted in the foreground of this painting. The poem reads: "In the morning and evening/ I see over the shrine/ the Road in the Sea of Hakozaki/ and close is the Shiga hills" Road in the Sea (Umi no Nakamichi) is a narrow peninsular and Shiga is an island off it. (The poem was transliterated by a team of scholars from Japan led by Professor Fuii of the National History Museum in November 2002)