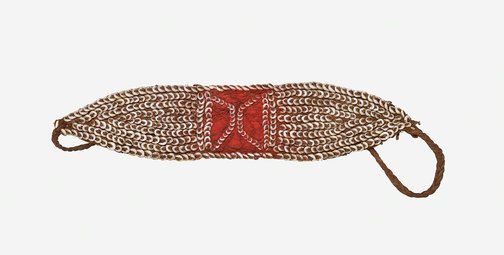 Headbands made by sewing drilled and polished nassa shells onto a band of barkcloth, banana leaf, or other support were found in many highland cultures. In pre-contact times, nassa shells were traded from the north coast along the Jimi River into the Mount Hagen region. For many highlanders, the source of shells was unknown. The Huli and Wola of the southern highlands believed nassa shells were harvested from an enormous tree. The Telefolmin of the western highlands thought they emanated from the corpse of a man.

Before the 1940s nassa shells were rare. Valuable shell headbands – often worn by men in battle – were gifted as part of wealth exchange ceremonies together with ropes of cowrie shells. When the Australian administration began bringing large quantities of nassa shells directly into the highlands, large mats of shells began to circulate and were included as part of bride price payments. Pearlshells and cash eventually superseded nassa shells as important bride wealth items.