Morning, from the suite Times of day 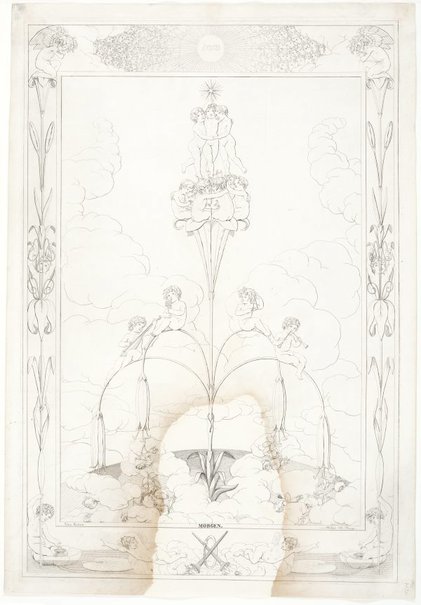 Although he made a late start to his career and died at 33, Runge ranks second only to Caspar David Friedrich among German Romantic artists. He was of a mystical, pantheistic turn of mind, and sought a totally new art of symbolic forms based on pure outline to express his ideas about the harmony of the universe.

Runge began working on the subject of the ‘Times of day’ in 1802 as mural designs for a specially constructed chapel. He intended the murals to be seen to the accompaniment of poetry and music. The ambitious project, which occupied the artist until his death in 1810, was never realized however.
Early in the planning stages, Runge made four large drawings which served as models for the set of engravings intended to advertise his designs to the artistic community and announce Runge’s plans to create a series of large paintings. The prints were praised by no less a figure than the writer Goethe, who displayed a set given to him personally by the artist, in his music room.

The iconography of the 'Times of day' is centered around the symbolism of flowers. In ‘Morning’ a white lily, the symbol of light and celestial love, rises from the earth as a representation of sunrise; three putti, or genii at the top of the flower represent the Holy Trinity. In its pendant, ‘Evening’, a female personification of night rises above the lily, seen sinking into clouds underneath a garland of roses, which represent earthly love, a sentiment reflected in the embracing children below. ‘Day’ shows a lily in full bloom, with a mother and her children in a bower surrounded by ears of grain and fruit as emblems of earthly love and fertility. Its pendant, ‘Night’, is dominated by poppies, the traditional symbol of night and sleep.

Browse other works by after Philipp Otto Runge