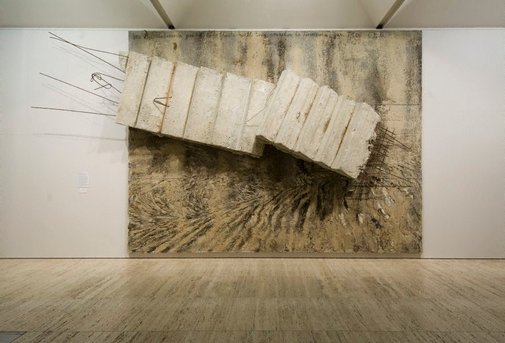 'Von den Verlorenen gerührt, die der Glaube nicht trug, erwachen die Trommeln im Fluss' is the title of each of two works, one painting and one floor installation. It is not uncommon for Kiefer to use the same titles again and again. This is because of his sustained commitment to certain themes that he pursues over many years. These two works represent two such themes in Kiefer's development and although they look very different as objects they are two sides of one key idea in his mature work.

The horizon in Kiefer's work is always more than a landscape feature, it is highly charged symbolically. 'Glaube, Hoffnung, Liebe' 1984-86 in the Gallery's collection includes a propeller which has the potential to fly over the horizon transcending the boundary between heaven and earth. In many of Kiefer's paintings and sculptures there are ladders, wings, rockets, Ziggurats, snakes and rainbows that all in some way suggest the idea of transcendence. The broken stairs in 'Von den Verlorenen gerührt...' correspond to the broken propeller suggesting the dream of climbing above the horizon and yet it is a dream that is doomed to fail. This ambivalence towards transcendental aspiration is common to much art of the late twentieth century. For example Ken Unsworth's sculpture 'Rapture' 1994 in the Gallery's collection takes the form of a stairway to heaven frustrated when the stairs made of the keyboards of a grand piano arrive at the body of the piano which is stuffed with straw and will never sound the music of the spheres.

The floor installation belongs to a body of works that reverse the passage between heaven and the earth. This is often represented by emanations from above sometimes in the form of poured lead attached to a painting or hanging in space like the finger of God. Many of Kiefer's recent works have more to do with the stars which according to the 16th century philosopher Robert Fludd each have their equivalent in a flower on the earth. Here we see a pile of glass plates that have fallen as a shower over piles of human hair (material human presence). Inscribed with one of 9000 star numbers, each piece of glass represents a heavenly intervention or emanation. Human hair is woven throughout the glass in a reference to the Egyptian Queen Berenice, who often appears in Kiefer’s works in the form of long locks of hair. Berenice was famous for her beauty and as an offering to the gods to bring her husband safely back from war, she cut her tresses and placed them on the temple altar. The Gods were so pleased with the offering that they took the hair into the sky where it became the constellation Coma Berenices (Berenice’s hair). The constellation of Coma Berenices is centred between Canes Venatici to the north, Virgo to the south, Bootes on the east and Leo on the west border.

The following text is taken from the 2005 exhibition literature when these works were first shown in London:
Kiefer's elegiac oeuvre is based on a vast system of themes and references relating to the human condition, explored through a highly emotive use of material and medium. In his muscular artistic language, physical materiality and visual complexity are equal to the content itself, which ranges over sources as diverse as Teutonic mythology and history, alchemy, apocalypse, and belief. As corollary to this breadth of content, Kiefer employs an almost bewildering variety of materials including - in addition to the thick oil paint that is the base of all his large-scale works - dirt, lead, models, photographs, woodcuts, sand, straw and all manner of organic material. By adding 'real' materials to the illusionistic painted surface of his gigantic tableaux, he has invented a compelling 'third space' between painting and sculpture.

Few contemporary artists match Kiefer's epic reach; the provocative and paradoxical nature of his work suggests that he embraces the notion of the modern artist who stands resolutely outside society, flaunting its histories, its taboos and its myths. By assimilating and utilizing the conventions and traditions of history painting, he goes beyond them, mingling viewpoints and presenting contradictory interpretations while emulating the genre's grandiloquence.

Anselm Kiefer was born in 1945 in Donaueschingen. As a young artist in a Germany reeling from the after-shocks of the Second World War, he opted for a thoroughly and obviously indigenous art, of native subjects, values and symbols that contended with the fraught territory of German history and identity. In the late 1970s he started to make large, highly worked books that began with photographs staged in his studio, gradually gaining body through the application of lead, paint and other collage elements. These impressive objects indicated the way to the complex, process-oriented works of his mature period. In 1991 Kiefer left Germany, eventually settling in the south of France. In the same year he made an exhibition of paintings stacked randomly on top of each other as if discarded. This led to a hiatus in his art production that lasted more than three years. After this he began making new work with a wholly new subject matter, themes and references, dealing with central spiritual and philosophical concerns of our time. Over the past four decades, Kiefer has exhibited his work extensively throughout the world and is included in the world's most prestigious public and private collections.

The drums in the river came alive, beaten by the lost ones, who were not supported by faith

The drums in the river came alive, touched by the lost ones, who were not supported by faith

oil, emulsion, acrylic and sand on canvas with concrete staircase