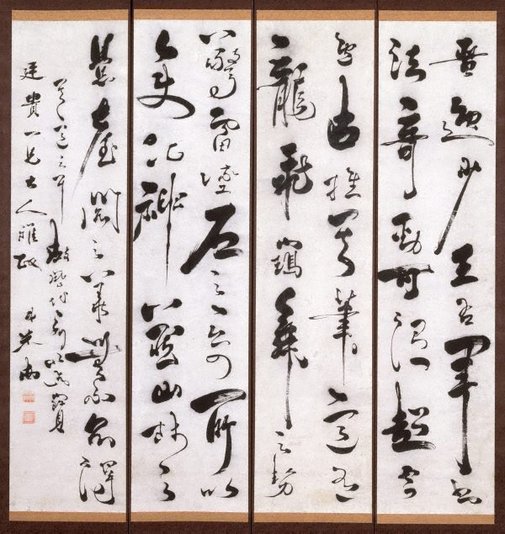 Zhu Nan was a noted and recorded calligrapher in 18th century Qing China. This set of scrolls is executed in cursive script, with all the quiet drama, spontaneity and emotive variation that are characteristic of the style. They read (from right to left):

'The calligraphy of Wang Youjing (Wang Xizhi) of the Jin dynasty is unique and powerful, superior to any before and after him./ His brushwork is like a flying dragon and dancing phoenix, and resembles astonishing thunder and falling rocks./ It contains the vitality of expression, the spirit of the mountain and forest, and the beauty of the pavilion. Everything about it is so admirable./ His writing is so unique in history, it is treated as a great treasure. I wrote this to Ting Gui, my kindest brother, for your instruction [signed Zhu Nan].'

The phrase of 'Long Fei FengWu', flying dragon and dancing phoenix, was first used by famous Song Dynasty poet Su Shi（1037-1101). It is often used in Chinese to describe lively and vigorous flourishes in calligraphy.

The Chinese character for 'dragon' has evolved from oracle bones and bronze inscriptions to the two types of modern day writing (the simplified style or the more complicated style). Calligraphers throughout history also created their own styles when writing the character.