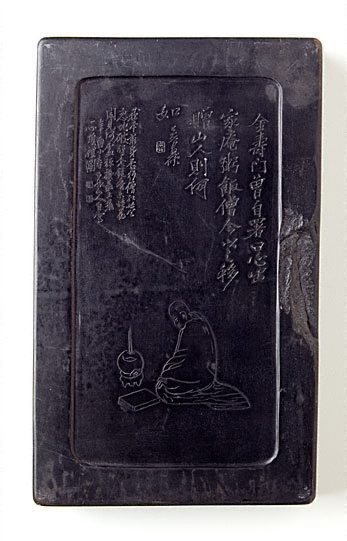 This unusually large, fine, black inkstone has the added interest of the inscriptions on it and the provenance they imply. It is incised with an image of a kneeling Buddhist monk, which, the inscription suggests, is a self-portrait by the noted Buddhist and artist Wang Zhen (1867-1938), and a poem [upper left] by him which reads:

'In my previous life I was a monk.
Suddenly I came down to this human world,
The fragrant incense is not smoking, but already flowers appear in my vision,
where I can find the essence of Chan [Buddhism].'

It is signed 'white dragon hermit' and dated 1912. The same inkstone also has two poems inscribed by Wu Changshuo (1844-1927), the principle one, on the face of the stone and adjacent to Wang's [upper right] is richly enigmatic:

'Jin Shoumen [Jin Nong] once said
I am in my heart a monk eating congxi [rice gruel]
Now I am going to use this title to give to you.
How about that?'

Another inscription by Wu, on the side of the stone, states that it was carved by Shen Shiyou (1857-1917), a noted collector and inkstone carver who often worked with him.

Inkstone with inscriptions by WANG Zhen and WU Changshuo