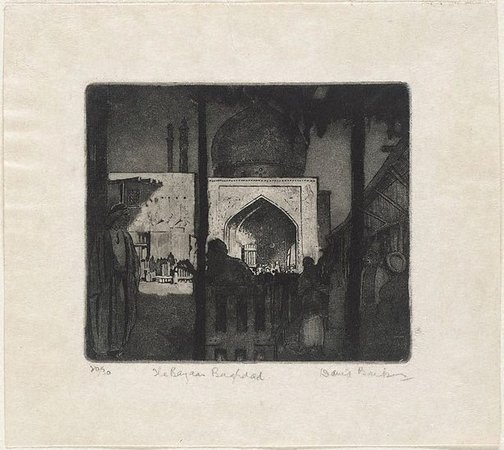 David Barker was a founding committee member and exhibitor with the Australian Painter-Etchers’ Society from 1921. This
etching was acquired from the Society’s first exhibition in which Barker exhibited seventeen works, a number of which had been shown the previous year at Gayfield Shaw’s Art Gallery.

The majority of the etchings by Barker included in the exhibition were of Middle Eastern subjects, where he had served
during the First World War, and made numerous paintings and drawings. The Gallery has three etchings by Barker in which he presents a romantic vision of life in the bazaars and streets of Iraq and the Holy Land, emphasising the harsh contrasts of sunlight and shade characteristic of the region.

Browse other works by David Barker