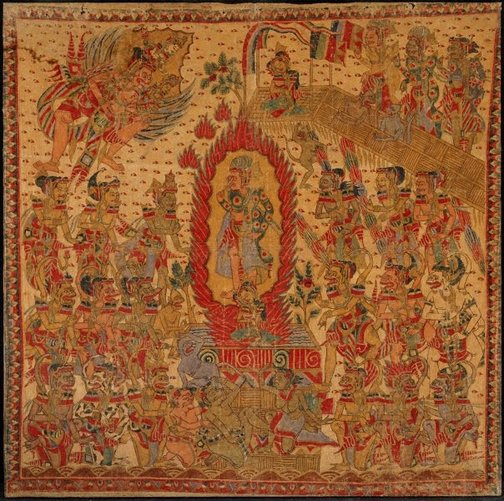 The 'tabing' is a roughly square painting of a Hindu epic scene that is used as a backdrop for offering made at the small shrine which is the centre of all Balinese household rituals.

The scene depicted is a famous one towards the end of the classic Hindu epic, the Ramayana. It refers to the aftermath of the abduction of the god Rama's wife, Sita, by the demon king of Lanka, Ravana. Once returned to her husband, rumours emerged that Sita had been seduced by Ravana. To prove her purity Sita threw herself into a fire, but the god of fire, Agni, sensing her heart was pure, refused to let the fire harm her. The scene upper right shows the ramp (from which wives jump into the funeral pyre) with a pavilion in which sits Trijata, Sita's companion during her captivity. The scene upper left depicts the gods Shiva, Indra and Kubera on the demonic Wilmana bird.

Tabing depicting a scene from the Ramayana: Sita's ordeal of fire

Anthony Forge, Balinese Traditional Paintings: A selection from the Forge Collection of the A.M.S., Sydney, 1978.