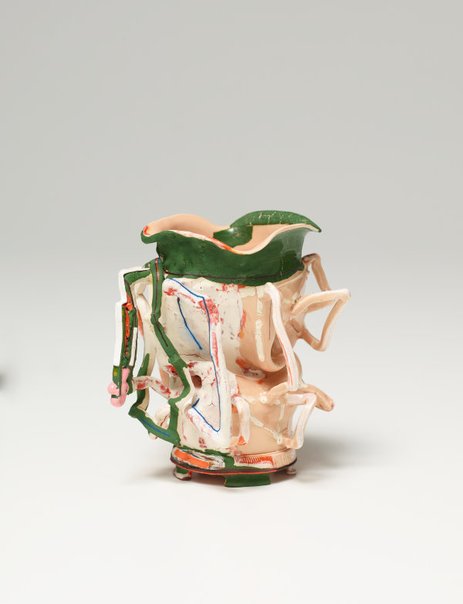 New York-based artist Kathy Butterly has been making ceramic sculptures since the 1990s when she studied at the University of California under sculptor Robert Arneson. In her work Butterly carries forward the tradition of West Coast ceramic artists such as Ken Price and Viola Frey, alongside Arneson, and brings to this lineage a decisive painterly quality that is expressed especially through her layered surfaces and firebrand use of colour. Butterly often refers to herself as a painter who “happens to work with clay”.

The intimately scaled work 'Multi' – along with its companion 'Whirld' -- continue her rigorous exploration into how traditional divisions between the ceramic object as vessel and as artwork might be dismantled. Her process of pulling and pinching, repeated firing and glazing – sometimes more than 30 times – results in objects that speak of their own physical making, appearing handled, tousled, deflated and patched.

This beguiling work began in the form of a generic off-the-shelf vessel. The mould of the pint glass that Butterly used to bring the work into being can still be discerned amongst the work’s fleshy folds and spindly handles.

Browse other works by Kathy Butterly