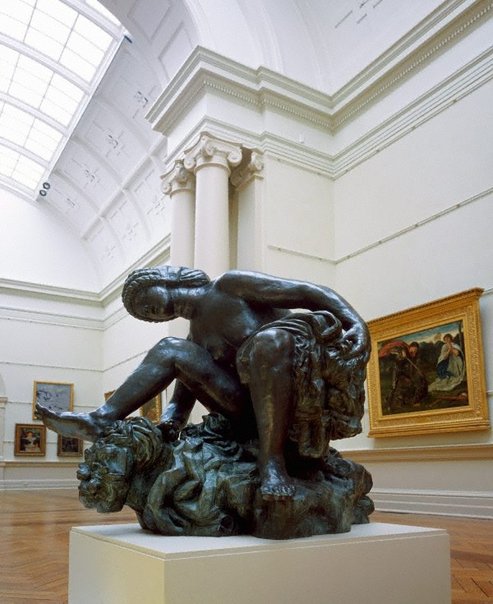 The best and truest of Rodin's pupils and followers, Emile-Antoine Bourdelle passed the flame of Rodinesque ideals to a younger generation of sculptors, notably Alberto Giacometti and Germaine Richier. Rodin was right to call him 'a pioneer of the future'. His gift may have been of a different order than Rodin's, and a lesser one in terms of historical significance, but he was no less the visionary public sculptor, accepting monumental commissions, and pursuing them, with the same zeal as his instructor. Though Bourdelle's interest in the relationship between architecture and statuary is not paramount in 'Grande baigneuse accroupie', this most sturdy of bronzes typifies his architectonic tendency. This is sculpture conceived as mass, measured and balanced. The rolling motion and erotic mood of the figure coexist with formal considerations equally interesting to the sculptor. The historical link between Rodin's 'The prodigal son' and Giacometti's 'Femme de Venise,' Bourdelle's work also sustains scrutiny on its own terms.

Browse other works by Émile-Antoine Bourdelle