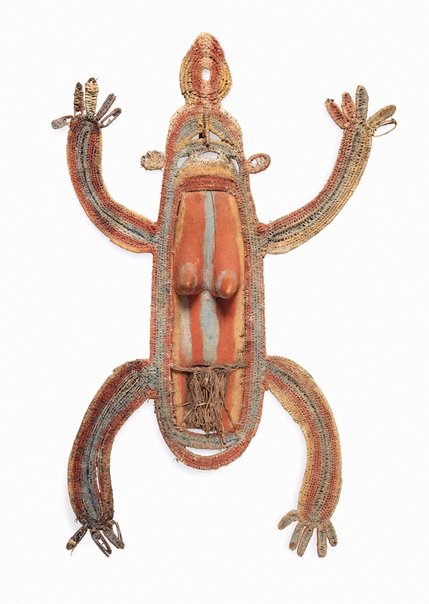 Spirit cults of various types, generally associated with fertility and the wellbeing of humans, permeated the New Guinea Highlands in pre-contact times. The Wiru of the southern highlands region made flat woven figures called 'timbu wara' as part of the 'timbu' cult. By the mid 1960s the 'timbu' cult had all but disappeared.

In the Wiru language 'timbu' means 'sky', suggesting a connection with the powerful sky spirits. 'Wara' has differing interpretations, meaning both 'spear' and 'guardian', indicating power, protection and perhaps even aggression. Indeed, these spirits of the sky, although having no direct interaction with humans, were feared; they could affect the human condition adversely and were to be respected and, at times, honoured. That 'timbu wara' were painted on shields reinforces the notion of their power and importance. Moriarty suggested that the shield pictured in fig 9.2 depicts a 'timbu wara', as it is painted in similar colours and is of the same form. It is probable the 'timbu' was regarded as a protective spirit, whose image could give power to a warrior.

Anthropologists Pamela Stewart and Andrew Strathern have written the fullest account of 'timbu wara' figures and the 'timbu cult'. As they explain it: 'The 'timbu' cult was aimed at restoring ecological balance and fertility to humans, pigs and the land.'(1) The 'timbu' cult was, in essence, a fertility ritual enacted on a five- to eight-year cycle. A cult house was constructed with a strong central post or 'tungi' – its 'axis mundi'. Pig and cassowary sacrifices over time provided jaws and other bones to be hung from this central post, along with the bones of marsupials hunted in the forest. These bones accumulated until they covered the tungi. 'Timbu wara' were made secretly by ritual elders in the forest, and later carried to the cult house accompanied by the music of the
sacred flutes; this ensured women and children stayed away. The culminating performance saw the 'timbu wara' emerge from the cult house pinned to a large dance hat worn by male dancers. A pig-killing ceremony followed after which the 'tungi' and most of the 'timbu wara' were buried in a hole. The act of burial of the 'timbu wara' was 'a way of preserving and containing their force'.(2)

Stewart and Strathern refer to the spirit as being male; however, the example here, collected by Stan Moriarty in 1967, is obviously female, with breasts and distinctly female clothing. Other 'timbu wara' appear more zoomorphic than anthropomorphic. In 1975 Moaga, an elder from a village near Pangia, described one of two figures he was holding as an echidna.(3) More recently, discussing several 'timbu wara', the naturalist and broadcaster Sir David Attenborough commented: 'obviously these figures are echidnas! Look at the proboscis.'(4)

Many 'timbu wara' have this pointed form to the head; indeed, the echidna is of particular significance, as some important stone figures discovered in the highlands have an echidna form. According to archaeologist Pamela Swadling, most of the stone figures – found in forested areas outside settlements – are associated with fertility and hunting.(5) There are possible connections between the stone figures and the 'timbu wara' in how they were used. Two 'timbu wara' figures in the South Australian Museum are decorated with hornbill beaks. The 'timbu wara' shown in fig 9.1 is similar in form to the figure collected by Stan Moriarty, with the beak of a hornbill mounted on a proboscis-like head, reinforcing the connection between the figure and birds in particular, but also wildlife in general. These seem to encapsulate diverse forms – male, female, animal and bird – and are thus linked to nature in its widest sense.

In the 1980s several Wiru informants suggested a connection between disastrous events – earthquakes, volcanic eruptions and deadly frosts – and the 'timbu' cult. They said that at such times, when elders feared nature was 'out of balance', they made 'timbu wara' to appease and placate the 'timbu' spirit; later, when nature was again in balance, the figures were buried, returning them to the earth.(6)

(4) The long-beaked echidna (Zaglossus bruneiji); Chris Boylan conversation with David Attenborough in Sydney in the 1990s and field notes, 1982 and 1988.

© Wiru people, under the endorsement of the Pacific Islands Museums Association's (PIMA) Code of Ethics