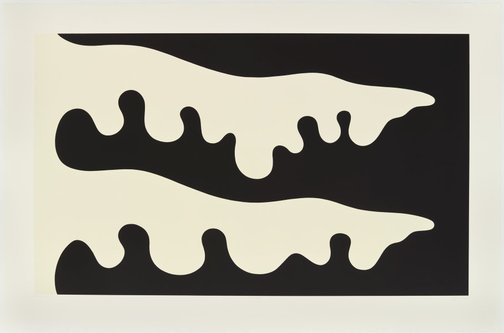 Harris’s works dwell somewhere between abstraction and peculiar figuration, incorporating elements of the surreal, such as automatic drawing and uncanny distillation of the figure. Immaculate surfaces, pristine edges and cropped forms are dominant features of his work.

Brent Harris’ To the forest series, made between 1997-99, was inspired by the woodcut 'Towards the forest II' (1915) by Norwegian artist Edvard Munch (featuring a forest landscape with two figures huddled together facing into the forest). The outline of Harris’s cropped and drooping tree branches in this print were influenced by the shape made by Munch’s tree tops, silhouetted against the sky in the form of cascading drips. In Munch’s print, the forest is not so much a representation of nature as a psychological landscape in which he could express fundamental human emotions, such as despair, fear, melancholy and jealousy. Harris’ To the forest series also forms a psychological landscape as an expression of human emotion. Harris’ works are often eerie renderings of personal trauma and family dysfunction; Harris and Munch’s prints resonate on a similar emotional register, through disparate visual means.

Brent Harris
To the forest