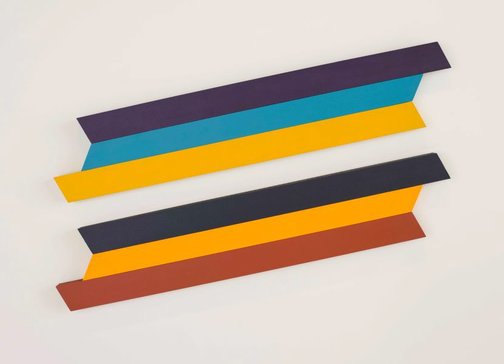 'Genus 0 no 3' 1968 is from a 'species' of modular paintings that evolved out of Margaret Worth's background in science and mathematics and her commitment to the 'universal language' of abstraction during the mid to late 1960s. These parallel pair of constructions comprise of multi-coloured parallelograms the forms of which are predicated on a broken Möbius strip: a cyclic band with a continuous single surface and edge that could also have been inspired by Worth's interest in Buddhism and reincarnation. Indeed, she has acknowledged: 'I was looking for a means to combine my wonder in science and in spirituality - a visual language that, like music and mathematics, could speak for both' [1].

Worth's 'Genus 0 no 3' encapsulates the spirit of the mid-twentieth century which was characterised by cultural and technological advancements and possibility. Looking back on her practice at the time, Worth has remarked that: 'Australia in the 60s, when the western world was prosperous and full of confidence, looked to the moon and beyond. The new scientific theories were thrilling. It was time of great optimism. It was time to celebrate' [2].

Margaret Worth
Genus 0 no. 3

Browse other works by Margaret Worth