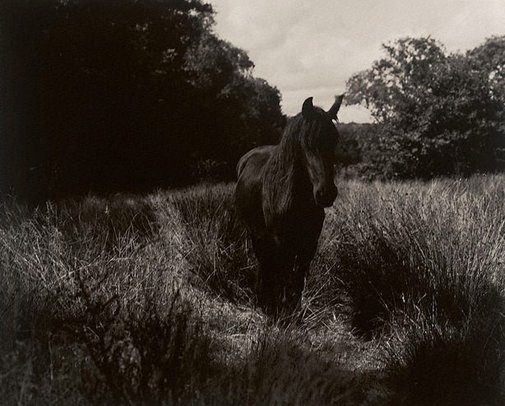 ‘Ophelia’ exemplifies Victoria Fernandez’s progression away from her earlier staged and theatrical work. Her focus is now on the mysterious and strange within the natural environment. While the move from colour to black-and-white photography allows for a play between dark and light – and therefore the metaphors associated with both – Fernandez’s concerns remain the same. She is fascinated with the evocative nature of the relationship between good and evil, exaltation and brutality.

Fernandez describes the theme of her work as ‘the interconnection between personal mythology and classical mythology’.1 Her work draws on myths and fairytales from across cultures, noting the similarity in the forms by which they express the common concerns relating to ‘love, death, and sex, amongst other things’.2 The symbolism and metaphors of the lone black horse are ancient and ubiquitous, its meanings numerous and varied. It has personified apocalyptic famine, been the vehicle for demons and superstition, symbolised pride, rebelliousness, strong desires and instincts, but it has also been used to represent intelligence, courage, nobility, generosity, speed and grace. In Fernandez’s image its manifestation suggests the quintessential ‘dark horse’ – a sleeper with an unknown quantity whose eyes we cannot see, and therefore cannot gauge, but on whose shadow we cast our imagination.

The softly focused image recalls childhood memories while simultaneously channelling that unique vision of a child – a vision in which real and imagined are rarely separated, and through which fear, fantasy and longing may become transfixed on transforming the familiar. This is a satisfying result given this is from an artist who stresses the instinctual nature of her work, the desire to frame an open, fluid idea, leaving ‘a lot of room in each shot for serendipity’.3

Browse other works by Victoria Fernandez 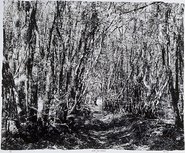