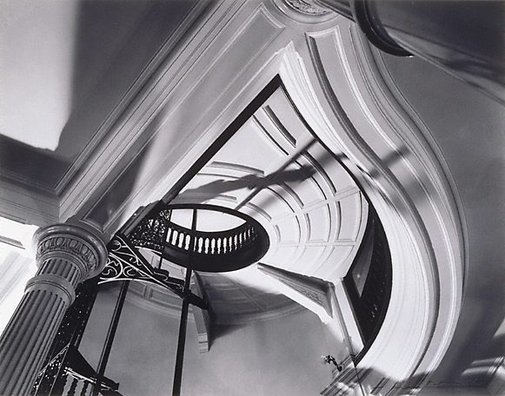 Max Dupain began to specialise in architectural photography in the late 1940s, having already built his reputation as a photographer working with fashion, commercial still life and portraiture. The aesthetic concerns of modernist architecture resonated with Dupain’s visual syntax. His use of dramatic lighting to delineate space and his penchant for cropped frames and canted angles (as in this photograph of the stairway in the CSR head office) amplified the formal features of his architectural subjects.

Dupain developed professional relationships with many architects including Glenn Murcutt, Philip Cox, Daryl Jackson, Jørn Utzon and Harry Seidler and his work came to define the way Australian modernist architecture was represented and disseminated. Discussing the importance of his relationship with Seidler in 1976, Dupain acknowledged the way his stylistic sensibility was shaped and informed by modern architecture: ‘Through Harry I have learned a lot: the stark form, the abstract form, the functional form, Bauhaus all over with the pictorial response uppermost.’