A night at the Currawong Palace

Michael Ramsden was a figurative painter who came to prominence in the 1960s and 70s. Following his graduation from National Art School in 1965, Ramsden and his then wife, fashion designer Jenny Kee, moved to London where they joined a community of Australian expatriate artists and designers. Upon their return to Australia in the 1970s, Kee and Ramsden moved to the Blue Mountains outside of Sydney.

Ramsden's 'A night at the Currawong Palace' was the key work in his exhibition at Watters Gallery in April- May 1979. According to photographer William Yang, Ramsden incorporated several of his family and friends into the picture, including author Patrick White, who considered buying the work:

'Before this exhibition Patrick went up to the Blue Mountains to preview Michael's major opus 'The night at the Kurrawong Palace'. This huge unfinished oil was based on a wedding photograph from the fifties. Others he left as unidentified typically Australian faces. Patrick White was there seated at a back table by himself. Jenny Kee, as one of the three brides, chatted to an unidentified man. Jenny's father Billy Kee stared out from the centre of the painting, while her mother Nee laughed in the back ground. Linda Jackson turned away, while Clytie Jessop stared solemnly from the canvas. Michael's brother was there as a shy young boy. An Aboriginal waiter lurked in the background' [1].

Michael Ramsden
A night at the Currawong Palace

Browse other works by Michael Ramsden 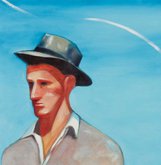