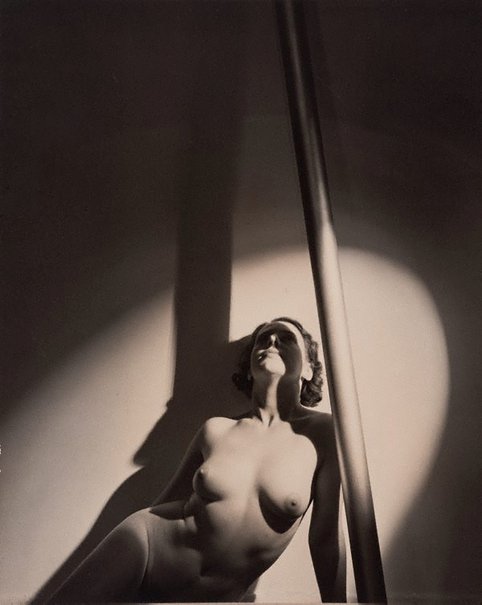 Max Dupain is Australia’s most celebrated modernist photographer and was an avid promoter of photography as an art form. He worked as a commercial photographer, establishing his own studio in Sydney in 1934 and working across still life, portraiture and architectural photography.

In his personal work, Dupain experimented with surrealist aesthetics, formal abstraction and montage. ‘No. 1 nude composition’ reiterates Dupain’s prolonged interest in depicting the body and its collapse into abstracted form. His dramatic use of shadow and spotlighting to isolate and accentuate parts of the female body shifts the viewer’s focus away from anatomy and towards pure composition. Dupain’s model, her face and identity obscured, contorts her body in concert with the vertical pull of the pole she leans against. These two subjects, the woman’s body and the pole, perform the same feat. They partially denounce their figurative associations to become semi-abstract compositional devices.

Dupain continued this motif of the female body pitched against the stark metal pole in his better known work ‘Nude with pole’. These paired subjects cultivate an antinomy between opposing forms. With these works, Dupain generates tension between the organic curvature of the body and the clinical linearity of the pole.