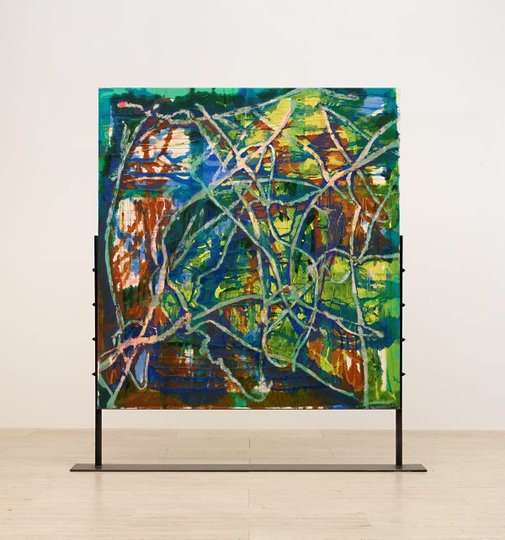 Dona Nelson has exhibited extensively since the 1970s and is recognised for her adventurous and technically innovative paintings that have vehemently resisted stylistic categorisation. In 1968, at the age of 19, she was accepted into the inaugural year of the Whitney Museum of American Art’s Independent Study Program. Always deeply interested in the process of painting, her early work revealed a diverse range of influences, from abstract expressionism to pop, and reflected her conviction that the distinctions between figuration and abstraction were not terribly relevant to the act of painting itself.

‘March Hare’, belongs to a series of two-sided paintings that have been the central focus of the artist's practice for the past decade. Executed using special coatings to change the surface tension of the canvas and high pressure hoses to physically force the paint fronm front to back, the work is comprised of two distinct images – one which is actively worked upon and another which the artist thinks of as a ‘received’ image. Formally bold and rigorously idiosyncratic, 'March Hare' addresses us like another body in the space and challenges us to unpack the mysteries that went into its creation.