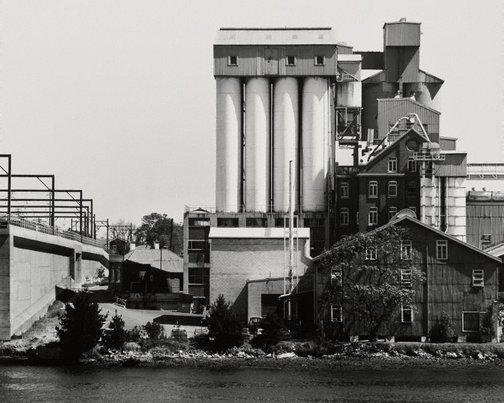 A classical regard for symmetry, geometry and order characterise Mark Johnson’s ‘Sydney Foreshores’ series. Johnson said of this series that: ‘These photographs reflect my perceptual organization of the Sydney landscape into coherent “wholes”.’ The industrial architecture of power stations, factories and warehouses lining the harbour is treated by Johnson as a means of composing images of mathematical regularity, harmony and proportion. The repetitive forms of chimneys and windows in ‘Iron Cove: Balmain II’ 1979 (AGNSW collection) present a continuous pattern of line and contour that is repeated with appropriately machine-like regularity. So too the cylindrical silos and gabled rooves of ‘Parramatta River: Rhodes’ create a compelling composition through the juxtaposition and repetition of geometrical forms. Johnson’s earlier series, ‘Sydney Buildings’, had similarly sought out the compositional potential of windows, doors and pedimenta in the Victorian facades of Sydney.

Johnson’s body of work spans a 10-year period from the mid-1970s, when he started photographing, to the mid-1980s, when he returned to his medical career. He was one of five photographers commissioned in 1978 to work on the CSR Centenary Photography project, which he credits as the inspiration for the ‘Sydney foreshores’ series. His work has been influenced by the spare minimalism of the German photographers Bernd and Hilla Becher’s architectural studies, which are similarly devoid of human form, and by Eugène Atget’s documentation of the disappearing shopfronts and buildings of nineteenth-century Paris. Many of the industrial foreshore buildings Johnson photographed, including the Balmain power station at Iron Cove, have since been demolished, or converted into luxury apartments. 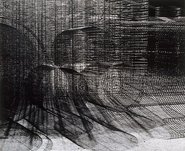