Charles Perkins on bus home after visit to Tranby, Glebe 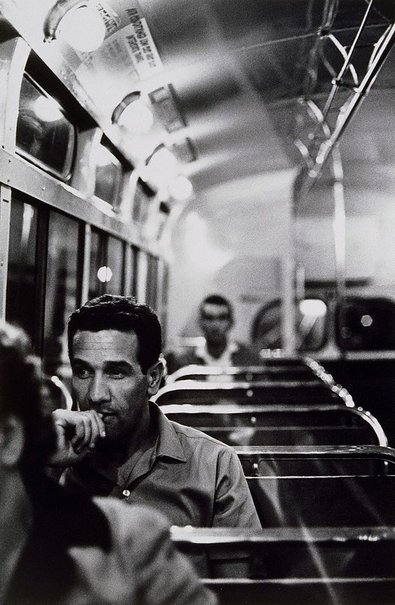 On assignment, photojournalist Robert McFarlane spent the day with Charles Perkins to produce a photo-essay for ‘Walkabout’ magazine. He asked Perkins to ignore him and the camera when he was photographing three seats away. When interviewed, McFarlane described Perkins as quietly passionate, motivated, with a sense of his own fate, who never lost sight of where he came from, who did not have an egocentric vision but a vision for his people.1

The pensive portrait of Aboriginal activist and later Federal politician Charles Perkins was taken at night on a bus when he was returning home after mentoring country boys at Tranby Aboriginal Co-operative College, an independent learning environment for adult Aboriginal and Torres Strait Islander people. The image captures Perkins in contemplation as he looks out the window. The dark exterior contrasts with the bright interior lights of the bus which reflect off the chrome rails defining the receding geometric shapes of windows and seats through light and shadow, to the lone figure at the rear. This introspective, seemingly isolated, portrayal of Perkins contrasts with his political activism at the time when he led the Freedom Ride bus in the summer of 1964–65 with a group called the Student Action for Aboriginals from the University of Sydney.2 The Freedom Ride was an important event which raised awareness about the segregation of Indigenous Australians in New South Wales. Public acknowledgement of racial discrimination culminated in an overwhelming support for the 1967 Federal Government referendum which gave a clear mandate to implement policies to benefit Indigenous Australians.

Browse other works by Robert McFarlane 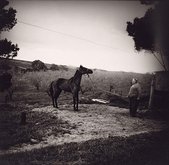