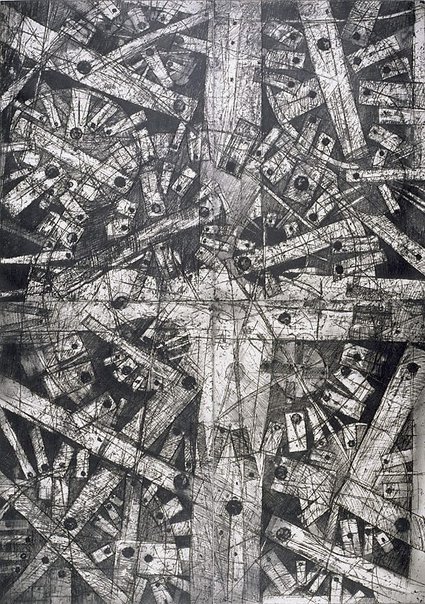 Roger Kemp was born at Bendigo, Victoria. He studied at the National Gallery School, Melbourne 1930-35 and RMIT. Kemp first made prints in 1970 while in London with the encouragement of Arthur Boyd. The 12 small drypoints that were the result of these experiments were printed by Boyd's printer, John Hull. Upon his return to Melbourne in 1972, Kemp made prints at a workshop newly established by George Baldessin and Tate Adams in the Winfield Building. John Dent, one of the printers in the new venture, re-printed some of Kemp's London drypoints, and with the encouragement of Baldessin, Kemp began to make larger and more ambitious plates. He preferred his images to be printed with a lot of ink and plate tone; all were printed with black ink on white paper.

This is Kemp's biggest and most ambitious etching, although for many years it was unknown. It was editioned, but not signed or dated when made, and stored until it was exhibited in 1989. It was printed at Prahran Technical College, because its large size required a larger press than that available at the Winfield Building studio.

Browse other works by Roger Kemp 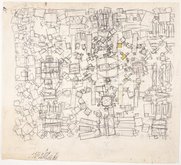