Amulet in the form of a composite beast (singa) 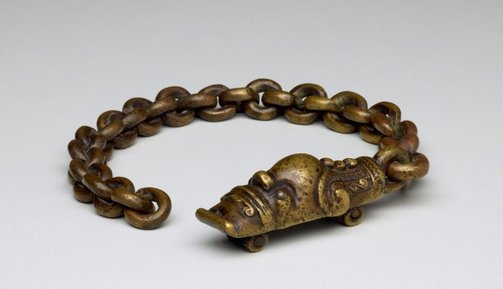 The Batak people of North Sumatra inhabit the mountainous interior region centring round Lake Toba. The lake and Samosir Island on the lake are at the heart of Batak activities and culture. Aside from the Toba group, the Batak identify themselves as belonging to five other distinct communities. The Pakpaki Batak live west of the lake, the Karo are north-west and the Simalungun are east of the lake. The Angkola and Mandailing Batak who do not share their borders with the lake are further south and in closer proximity to the Indian Ocean. Whilst the Batak have long maintained trading links with coastal communities, especially along the Strait of Malacca,their relative isolation meant that they did not experience direct contact with Europeans until the mid 19th century when they were introduced to Christianity by Dutch missionaries. Whilst most Batak villagers converted to the new monotheistic religion they never entirely abandoned their pre-Christian animist cosmologies and as a result some interesting and syncretic religious practises were established.

Unlike gold which was mined locally within the Batak or surrounding regions the brass and bronze alloys were acquired through trade in the coastal towns and was handled by the brass-caster who possessed a unique set of skills. This speciality practise was most common amongst the Toba Batak.

Cast in brass using the lost wax technique this amulet depicts the face of a ‘singa’, a composite supernatural creature whose image pervades the art of all Batak groups. Unlike the Sanskrit ‘singa’ or lion from which the term derives, the Batak manifestation combines elements from various creatures, including humans, buffalo, elephants and serpents. With a protruding chin and snout-like nose, this ‘singa’ features distinctive curling fangs and large horns that extend upwards to a headdress decorated with spiral designs and braided rope. Amulets depicting ‘singa’ and other creatures associated with the Batak upper and lower worlds were intended to protect the user, but also demonstrated wealth and status. They were worn on long waist chains and attached to small bags and pouches. In some groups, talismans depicting ‘singa’ were considered the prerogative of the shamanic priests, ‘datu’ or ‘guru’, who oversaw the spiritual wellbeing and protection of the community.

Bag fixture in the form of a protective amulet

Amulet in the form of a composite beast (singa)