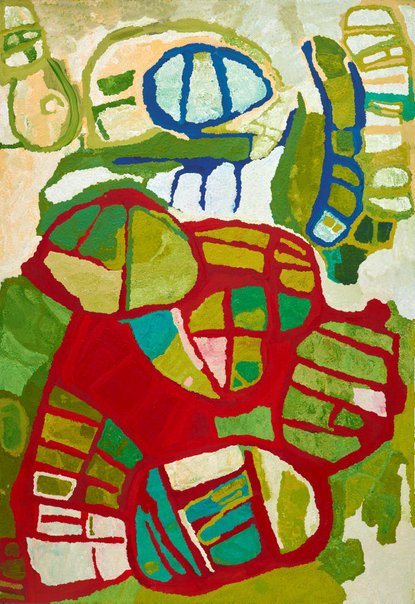 Myrle Pennington was born c1939 near the Kanpa waterhole deep in the heart of central Spinifex country. Pennington came to painting late in her life and rapidly developed a distinct style. Pennington holds birthright and cultural authority to paint the significant women’s sites of Mulpalya and Kanpa, related to the Pititjalili Tjukurpa (Scorpian Creation Line) involving conflict between Minyma Pititjalili (Scorpian Woman) and Minyma Wanatjtiti (Centipede Woman). She paints Kanpa in this piece, the place of her birth. It’s a men’s site that she would not have been able to see or source water from. Her thick dabbing of paint and on canvas mixing of colours mimic the organic dispersion of colour and textures that occur in the landscape. Her bold shapes encapsulate and divide her canvas into segments of accented brave colour combinations that are both the landscape and her body memory at once.