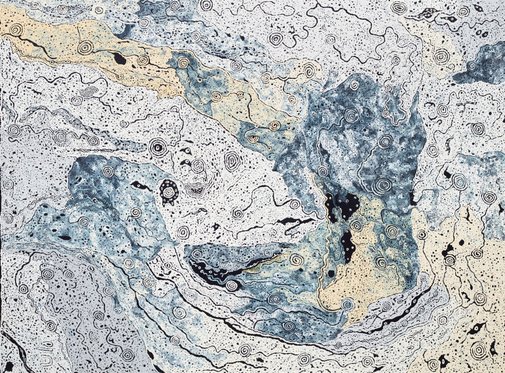 Keith Stevens is a senior Pitjantjatjara man born at Granite Downs station where his parents were working in the 1940's. He was mustering from an early age and didn’t start a western education until they moved to Ernabella mission. Keith's family would often visit their traditional homelands of Piltati and Iwarrawarra. They eventually settled at Piltati creek, what is now Nyapari Community. This is where he works at the smallest APY art centre, Tjungu Palya.

Nyapari Tjukurrpa reflects a dramatic shift in his technique, using watered down monotones with creamy highlights to create a depth of field that heightens the delicacy within the intricate line work. This is a contrast to his usual colourful tones and thick application.

As Stevens explains;
Kuka mamu; there's an animal crouching down there in Nyapari. Two men making (tjara) sheilds. They go to hunt that kuka by spearing him. Share with family and then we go down to Watarru way. Family sing down the boom rock hole (Iwarawara). There's plenty of water there.

Purchased with funds provided by Atelier 2018

Browse other works by Keith Stevens