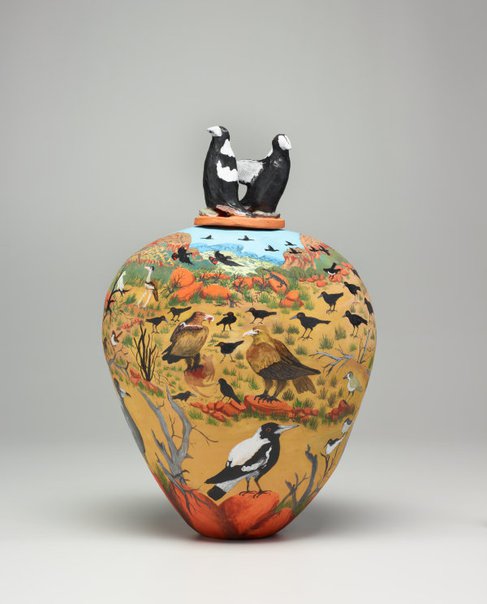 Like many of the Hermannsburg potters, Judith Inkamala has been strongly influenced by the style of painting made famous by Albert Namatjira and his peers in the 1940s, and continued by subsequent generations. Originally these paintings were captured in watercolour on paper. When Hermannsburg Potters was established in 1993 artists in the region transferred the style to their ceramic works. Over time they have established a unique format for their pots which sees vast panoramas of country captured on the body of the pots, with distinct figurative elements adorning the lids. Typically, there is a focus on flora and fauna with a hero subject from the imagery being repeated in sculptural form on the lid. However; artists have also depicted an array of subjects from football players, scenes from the mission days, stockman days and retelling of moments in Albert Namatjira’s life.
Thepa Mapa sees Inkamala delve into her pictorial library of pots to create one that shows all of the birds that live on her country with her favourite bird, the magpie, as the centrepiece. She depicts the waterhole that the birds tend to stay close to while also referring to the different birds that people eat.