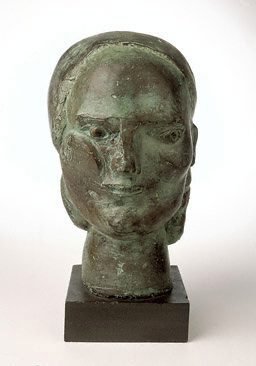 A previous student of the ESTC and The John Cass College London, Madigan has become, over an understated career spanning four decades, arguably Australia's most significant figurative carver. The female torso, the focus of much of her work, has led her to create sculptures which, at their best, have the sensuousness, subtlety and rigour of the greatest of the Indian carvings she admires.

Madigan's bronze head 'Mnemosyne' on the other hand is the most significant portrait the artist has produced. Depicting both her daughter and the classical muse of Memory, it is a particularly impressive work.

bronze with green patina on a slate base

Browse other works by Rosemary Madigan