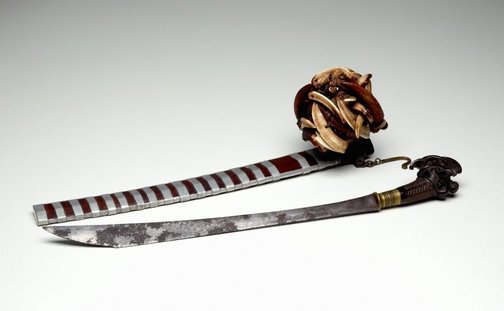 The sword and scabbard (‘belato’) were among the most important items belonging to a warrior on Nias, serving as a physical weapon and a protective device against enemies and malevolent spiritual forces. Found throughout the island, ‘belato’ swords are distinguished by ornate hilts in the form of mythical creatures and their scabbards which incorporate a range of talismanic devices, including carved ‘adu’ figures.

The hilt depicts the head of a ‘lasara’, a composite protective beast reserved for royalty which combines the features of a hornbill, deer and crocodile. A small monkey astride the ‘lasara’s’ neck was believed to predict and warn of potential threats. These motifs, along with the rattan amulet basket (‘rago’) fashioned by the warrior and caged with animal teeth and tusks, would have offered powerful protection
to the user.